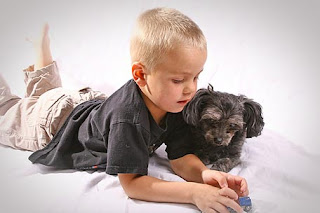 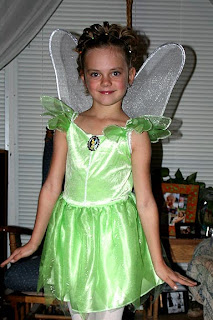 A scary thing happened at our house yesterday and I feel the need to share the experience with all my family and friends with little ones.

While Brandon and a little girl friend of his were playing outside, a man came to the gate and asked to speak with me. I came outside and recognized him as a mentally disabled man (around my age) who lives in the park. He was holding a clipboard and said that he was checking the meters. I figured the park managers were giving him a job to do, a way of helping him out since he can't get employment. Thinking he would be in and out in less than a minute, I went inside and shut the door so the dogs wouldn't get out.

About five minutes later the park manager's wife came to the door, asking if I knew that *that man* was in our yard playing doctor with my son. I ran outside, only to find Brandon lying on a board to the side of the house, with some kind of medical tape being removed from him. The man was told to leave immediately, I made a couple of phone calls, and the police arrived a few minutes later.

Brandon described to the officer what he had told me about what the man had done: He taped each eye shut, taped from one arm over his belly to his other arm, and taped around the lower part of his legs. He insisted that the man did not touch him anywhere except his tummy and chest, when he had asked if he was ok. Brandon's friend was asked to be a nurse, but luckily she didn't want any part of what he was doing.

Brandon vaguely described the man, and the officer immediately knew who he was talking about- he had passed him on his way to our house. He had dealt with this man before and said that he would go talk to him, his mother, and the park managers.

After a follow-up call to the police department we were told this man has the mental capacity of a 5-year-old child. According to them, he was truly playing doctor, prepping Brandon for surgery. We were given the name of his mother and were encouraged to have a talk with her about his situation. We were also told that while they have had issues with him before, he has never been violent - physically or sexually - with anyone. While I understand that his mental condition makes him difficult to deal with legally, we are still left with the sinking feeling that our children are not safe in their own yard.

When you become a parent you can read all the books and listen to all the experts until you're blue in the face. Unfortunately, there is something that books and experts can't prepare you for no matter how hard you try. That is the feeling of complete vulnerability that saturates every fiber of your being from the second the child enters the world. You become an open wound, aware that you are responsible for the mental, physical, and emotional safety of your child.

Every time a story of a misused child comes into the news, a little salt is poured into that wound - what if that was my child? Every time you hear of an abduction, a little more salt - what if that was my child? The older they get the more tender that wound becomes, as the inevitable begins to happen. Their independence blossoms and you are faced with the excruciating realization that you have to loosen the strings and let them learn to explore life on their terms.

It is experiences like we faced yesterday that I question everything I have ever done as a parent. No matter how much I have loved my son, protected him, guided him - I felt like I failed him. I feel like I should be able to see into every pair of eyes, knowing every intention and expectation of anyone who crosses my children's paths. Why didn't my intuition give me a nudge? Isn't a mother's intuition supposed to be perfectly honed by the time the child is birthed...especially the second one?

Yesterday was a close call - way too close. We were lucky that Brandon didn't completely lose his innocence; the man is lucky Dave wasn't home when it happened, or we'd be at a bail hearing right now. I hoped that this late in the game I would have the mommy thing mastered - looks like I still have some learning to do. So as I learn from my complete lapse in judgement, I want you all to grab your babies, give them big hugs and kisses, and promise them that you will never do what I did.
Posted by The Accidental Somebody at 11:35 AM

I am so sorry to hear about what happened to Brandon and am glad he is okay. I wish like you that my mommy intuition was stonger sometimes. I know we can be so careful to watch out for our kids and still make mistakes. The world is a scary place. It is not like when we grew up and played in the neighborhoods all day long with out our parents worrying too much. I feel sad that my kids don't get to grow up with that kind of security. Thanks for posting and reminding us to be a little more careful. We love you and know that you are a great mom!! Amy

What a terrifying experience! Thanks for sharing it, though, so we can remember that we're not immune to what goes on in this (unfortunately) scary world!