As much as I dislike my work uniform and how people call me a cop (how insulting to law enforcement!), there have been a few times when it's given me a good giggle or two.

Like one afternoon a couple of years ago after a long day at work I noticed the neighbors across from me were having a little get-together.  A few people stood out on the balcony and as I trudged up the stairs to my apartment I noticed their door was open and the smell of pot was pouring out.

No sooner had I arrived at my door than their door quickly slammed shut.

I would have paid money to have been a fly on their wall when they saw the "cop" walking up the stairs.  Hehehe...

Or the time my kids had to be in daycare, and when I went to pick them up the other kids were wondering why the police officer was taking away Amanda and Brandon.  It's really a shame we don't carry handcuffs.

Seeing the look on their faces then would have been priceless.

Or the time I ran into Wal Mart to grab a frozen meal to take to work with me and some douchebag dad was berating his kid in the middle of the aisle.  Right after he swatted him on the back of the head we made eye contact and for a brief second, the most awesome look of dread spread across his face.

I never say anything in response to these occasions, I just let them have their mini-panic attacks then let them figure it out on their own.

The joy I feel during those brief seconds, when you know they think they're doomed (or that their friends are on their way to the clink), is enough to make my heart smile at what dumb fucks people (the adults, not the kids!) can be.


***Update for Timothy Bowen who wanted a pic of the uniform.  Here it is in most of its glory...oh yay. 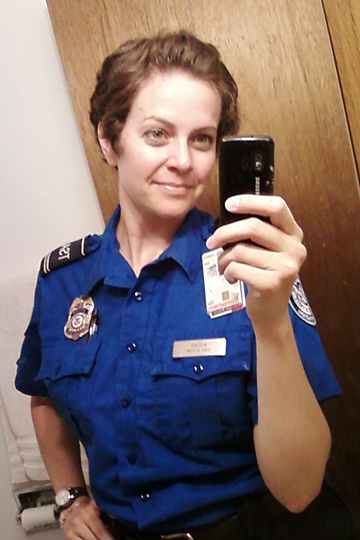 Posted by The Accidental Somebody at 9:20 AM

my day in a sentence said...

I see how the uniform might come in handy. :D
I'd use it to confiscate beer. A lot of. :D

show us a pic of the uniform!

The abuses of power!

I was a law enforcement officer in the Air Force, Kim. I can tell you I shamelessly abused my position.

Every once in a while I’d drive by the ball park and watch the kids play. I hate parents who live vicariously through their children trying to make-up for their own short comings when they played sports. And I’ll have no truck with even the hint of child abuse.

A young boy of ten or so was being berated by his father for too many foul balls or some such bullshit. Just as I rounded the bleachers he smacked him upside the helmet. You know exactly what the man's face looked like when he saw me and you know exactly how good that made you feel.

But when you wear a gun you can do one better.

When he and his son left in the car I jumped back in mine and followed him. Can you imagine the smirk on my face? If you don’t know, the purpose of following someone is so they will become nervous and make a simple mistake. And then I can pull him over. Actually I could plainly see enough wrong with his car to pull him over already (we all have these little defects…don’t piss off a cop) but following him was so much more satisfying.

After five miles he failed to signal as he was turning into his drive way in the housing area (double whammy…I get to embarrass him in his own neighborhood). I had him walk around his car with me while I wrote him 7 tickets. In today’s dollars it probably came close to $1000 to fix.

And before I left I told him that if I ever saw him strike a child again I would do to him what I did to his car. But he would need a much more expensive lawyer to fix that.

I hate weak men and I despise a weak man who beats upon a defenseless youth to prove his manhood.

Leftcoastguy.... I am totally with you. As for the uniform thing.... Putting a little fear in some people who deserve it is all good with me... now if I can just get the same reaction out of my stripper clown outfit!

I want to borrow it for a week or to and yes, I will use it to the fullest advantage.

Looking hawt by the way.

You make it look good Kim. Miss seeing you in it everyday

Rocking that look...thanks for following back.

I'd think you were law enforcement too! But you look really good in it! I love a woman in uniform! (Men too.)