There are seven kids in my family, five girls and two boys.  It's not uncommon (even to this day) for my parents to introduce me to their friends as child number five, daughter number four.  Maybe it's easier for them to remember our coordinates than it is to remember the names they bestowed upon us at birth, because for the longest time I was either Paige, Amy, John, or Holly (David and Piper were the oldest two and by far the coolest - they didn't mingle with us younger peasants, therefore their pristine names were not mixed with the mud of ours).

Anyway, I spent my childhood attached at the hip with Amy (child number four, daughter number three for those keeping track).  She's two years and three months older than me and was several inches taller until I hit my growth spurt in junior high, and we were raised like twins.  We were two of the gangliest little dorks I've ever known, running around the neighborhood in matching sunsuits and dirty hair, looking like little street-rat boys.

We shared a bedroom, often times falling asleep to the soundtrack (on vinyl of course!) to the movie Annie, and if we weren't sleeping we were fishing.  (Picture a sea of dirty clothes between two twin beds, each of us clasping one of Mom's yardsticks, screeching loudly as one of us "caught a HUGE one!!" only to get caught and after promises to get to sleep, we would whisper loudly as we each CAUGHT A HUGE ONE!!)

We shared that room until she turned twelve, as it was likely the eldest had flown the nest and a room became available.  What a sad time that was, the glow of the stereo my only company.  I remember climbing into bed with her even as a teenager when I had nightmares, her presence immediately calming and comforting.

When Amy was a junior (I think?) she robbed the cradle and met a young man who was in the year between us at school, the man that took her away from me for good (although I was a prominent third wheel and wore that title proudly until we all graduated high school), the man with whom she would birth five kids.

We don't talk much nowadays, but thanks to Facebook and texting, we keep up in the capacity that fits both our busy lives, and that's OK.  Having said that, Thursday evening she is flying in to visit for a few days.  Just her.  I was nervous at first, as we never have company and I worry she's going to be bored out of her ever loving mind.  But as the time gets closer I am becoming more and more excited to see my "twin" whom I haven't seen in four years.  I have no idea what we'll do while she's here - maybe just enjoy one another's company.

I can't think of a more perfect visit. 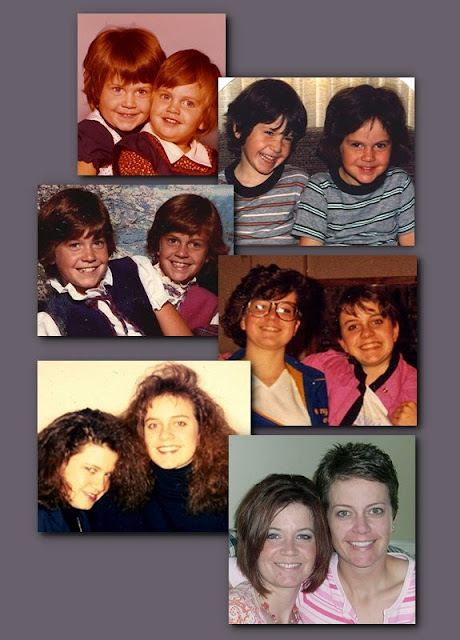 This collage was made after a visit I made to her house back in 2008.  We're hoping to get some updated pictures while she's here!  :)

Posted by The Accidental Somebody at 10:57 PM

I too am one of seven. There were four of us, then came three cousins in, suddenly adopted. Overnight we went from 'more boys' to 'more girls'.

Seven is a lot! Glad we stopped after two. :)