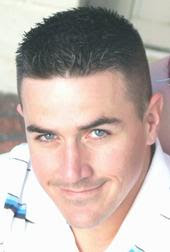 This post would be so much more poignant if I actually had a picture of him in uniform! This fine young man is my little brother, Officer John Harris. Not only did he just graduate from the police academy, he received the Honor Graduate Award for being the best in his class! Way to go John!!!

While I am not surprised that he has successfully become a police officer, I must say that I am a little relieved. You see, in my youth I tortured this poor soul - I was just plain ol' mean to him. I was the typical big sister who teased him, fought with him, and made him step in doggie doo. I am relieved that my sisterly persecution didn't ruin him for life, sending him spiraling into a life of juvie and the state pen. Instead John has turned out to be one of the funniest, kindest, most down-to-earth guys I have ever known.

So if you're ever visiting the great state of Wyoming and find your way down the streets of Cody, maybe you'll see my little brother on the beat. If the need arises, be sure to drop my name. Maybe he'll cut you some slack...but then again maybe he'll write that ticket faster than you can say *doggie doo*.
Posted by The Accidental Somebody at 9:30 AM

Way to go, Officer! And don't worry, Kim ... he wasn't such an innocent victim of all your sisterly tormenting! I remember (fondly, of course) the friendly(?) bullying of my dear cousin John. You are right, though, in that he is one of the nicest people in the world! I guess maybe he learned a little something from his big sister! :)