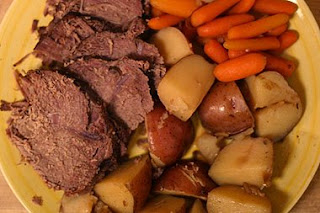 I threw a pot roast in the slow cooker...does that count? If the beef looks dry it's because it was! It was a very lean cut which kept it from being super juicy, but it was still delicious. Amanda kept saying over and over again that she was amazed that #1 I cooked at ALL, and #2 that it tasted so GOOD! Why is this such a big deal?
I HATE TO COOK!!
:) 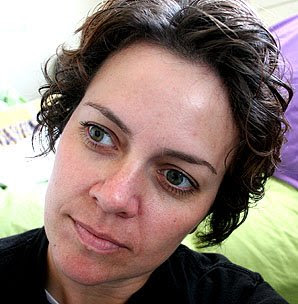 I found that if I work WITH my curls, they don't seem quite so scary. I'm still not thrilled about how my hair looks, but it's different and fun. There will also be a 5:00 showing of Monsters vs Aliens on my huge IMAX forehead.
I had so much planned for this morning, but my tired body got the best of me and I napped instead. Why is my body so tired, you ask? I have no idea. It just was. I think it's trying to be narcoleptic...but instead of falling asleep instantly it just goes into super slo-mo until I recharge for a couple of hours.
I did get to the gym this afternoon after picking up Brandon from school, and put in 30 minutes on the stationary bike. I normally hate that thing, but the ones they have at my gym have a TV on the panel thingy. So I work up a good sweat while I watch Wife Swap, careful to not shout obscenities at the lame husbands and lazy kids. Makes the time fly by!
It was a little harder for me to be motivated today, but I know that's part of the business of change. It's not supposed to be easy!

Posted by The Accidental Somebody at 2:03 PM

Keep it up Kim, you are the greatest!! You just have to convince yourself of that. I hope you keep posting your stories...if nothing else this blog is very entertaining for those of us not trying to change! j/k Let us know how we can help.

Maybe you were tired from digesting such a feast! Great work on the gym. Ummm, I have a membership to one, I even think I know where it is but couldn't tell you what the inside looks like. Maybe I should try to take my slow self and check it out. It would be good for me to go Everyday.

Awesome job, Kim! And I think your hair is cute. I am taking a break from tackling the massive piles of papers on my counter, dining room table, desk, and other places. My kids have succeeded in setting me back a good half hour or so by pulling everything out of the TV cabinet, but Evan's apology was so sweet and heart-felt that I couldn't get too mad. Hooray for change!