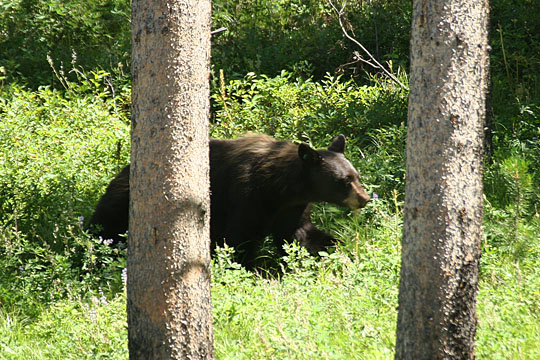 ﻿See this?  It's a black bear.  There are signs posted frequently around Yellowstone/Grand Teton National Parks that say DO NOT APPROACH BEARS!  $5,000 FINE.
I always think they should say, IF YOU ARE DUMB ENOUGH TO APPROACH A BEAR, KNOCK YOURSELF OUT.  MOTHER EARTH COULD USE SOME NATURAL SELECTION ANYWAY.
In true tourist fashion, we pulled over to join a mass of people standing on the side of the road, staring into the forest.  About 25 feet away from them was said black bear.
As we got out of the car I grabbed my telephoto lens - "Kids we're staying over here, on this side of the road."
"Awwww, but WHY?"
"Because it's a BEAR."
"Well all those people are over on the other side, that's not fair..."
"Yes, and all those people are idiots."
Many years ago I saw a Faces of Death film which showed a man being devoured by a grizzly bear while his wife filmed.  Quite honestly I don't know what was more disturbing - the man being eaten alive or his wife filming.
Regardless, it sends the same message...stay away from bears.  Period.  Maybe if I show the kids that film they'll think twice about wanting to flock closer to get a better look just because the other idiots are doing it.
Or maybe I'll tell them that if they don't stop being shitheads to each other I will force feed them to those bears.  Something to think about...
Posted by The Accidental Somebody at 1:43 PM

An excellent suggestion for fighting children!

I'm with you: those people over there with the bear? Idjits!

How have I not been following you? I read you. I LOVE you! You are funny. I love me a girl who acknowledges that some people need to be eaten by bears.
Anyway, at the risk of sounding cliché, I'm your newest follower!
PS: Now I'm totally intrigued by Faces of Death...I have to say, in all honestly, I'm pretty sure I would have grabbed my videocam too if my first husband was being attacked by a bear.

"IF YOU ARE DUMB ENOUGH TO APPROACH A BEAR, KNOCK YOURSELF OUT. MOTHER EARTH COULD USE SOME NATURAL SELECTION ANYWAY" - don't you think that messages like that would have more power than fines and polite warnings?
Like for example drink driving?
"Want to kill yourself? GO AHEAD! One less idiot on the road, but you might kill someone innocent you f***** shitbag!"

The world could definitely use some natural selection :-) Last year I did a tour of the Canadian Rockies, and one of the other people on the tour was a very annoying, rather stupid woman... first time we spotted a bear, she was all set to leap out the car, camera in hand. None of us were all that keen to stop her ;-)

~Sandra Faces of Death is not for the faint of heart, but it is fascinating!

~Roxy I think that would send a much better message, just blunt and to the point! People are stupid and it's a little embarrassing. Case in point, ~Nat's experience with the dumb lady who wanted to jump out of the car. In that case I would have shoved her out and locked the doors!