﻿I've been putting some serious vibes out to the Universe lately, and boy  is it responding!  One of the selling points I used on the kids when we packed up and moved to Cody was that awesome camping was a half hour away in some of the most gorgeous wilderness the state of Wyoming has to offer.
Sounds good, in spite of the fact that neither of my kids have ever been camping.  In fact, the last time I went was when I was about three months pregnant with Amanda, and seared into my brain is the memory of Dave accompanying me to the outhouse at 11:00 at night so I could puke.  Don't ask me why sticking my face into a smelly hole of shit was better than stepping outside the tent to retch in the bushes...
ANYHOO.
Back to camping.  Strong selling point, weak supporting plan.  See, here in Wyoming there are LOTS of grizzly bears.  Read my last post (I know it was a black bear, work with me) and you'll see how I feel about mingling with what might as well be a bunch Tyrannosaurus Rex.  In a nutshell, if you don't have a hard-sided camper or trailer you might as well dip yourself in BBQ sauce and consider yourself dinner.
So I've been putting out the vibe for the Universe to provide us with the means in which to camp safely, by next summer.  Well as luck would have it, a friend of my mom's has a truck for sale.  Correction - had a truck for sale.  I spoke to the owner tonight and she said she'd sell it to me for $1,000 and I could work some of it off at say, $25 per hour, by teaching her daughter photography.  Would I be interested?  Is a frog's ass water tight?  FUCK YES I'M INTERESTED!
She also added that I could make payments of however much, whenever, she just wanted it off her driveway, and she wouldn't be able to get the title to me until her son got into town on Monday.  I offered to not take the title until I had it paid off and she declined, saying it's quite alright - she knows where I live *chuckle chuckle*.
All we need now is a camper or a trailer, nothing big or fancy schmancy, just a roof over our heads that will keep us safe and dry.  I know, without a doubt, we will find what we need and will be frolicking in the woods Clampett style, come June 1 of next year.
So without further adieu, ladies and gentlemen, here is our new toy...and we couldn't be more ecstatic!! 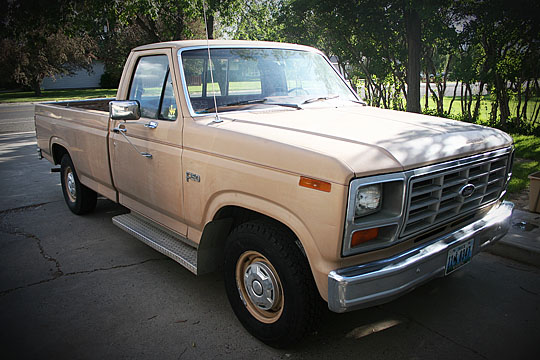 This beauty is a 1984 Ford F150 in all its glory.  One of my favorite things about this baby is that the interior reminds me of my late Grandpa Spud - it even smells a little like the pick-up he used to own. 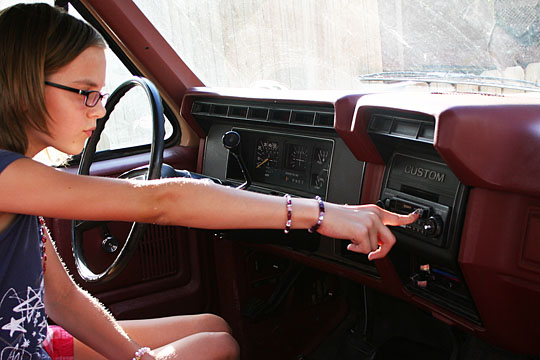 It even has a radio...BONUS!  Even my Saturn doesn't have a working radio (Ok, I put the face plate in the glove compartment but in my defense I DID lock the doors!  Bastards broke the passenger-side window and took it anyway...that was almost two years ago.) 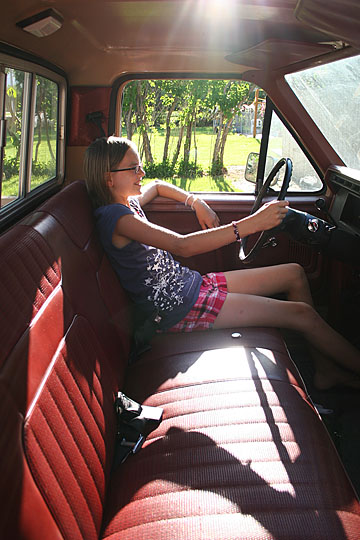 ﻿Don't be jealous.  I know you all want that cherry-red interior and old-car smell, but it's all ours; however, you're welcome to share it with us if you'd like to come on over to our little piece of heaven next summer!
So happy!  :)
Posted by The Accidental Somebody at 9:28 PM

That is AWESOME! How fun for you and the kids! :)

Awesome! It certainly looks like a great truck. I am sure you will have your camper soon as well. Happy camping next year.

I've always wanted an old beater truck, and if I wasn't allowing my mom to use it whenever, I'd give the kids some paint and brushes and tell em to go to town. Then we'd be tacky to boot!

Congratulations on the truck. I can't wait to hear about your camping adventures.

btw - you are a better woman than I am. I could not puke in one of those shit holes. I would have puked outside.

I love the truck, seriously with its red interior and the gear change at teh wheel. Love it. AWESOME, can I drive it when I come visit? :P

You must give it a name!

~Hit it - I wouldn't say I'm a better woman...maybe a more stupid woman. I blame it on pregnancy hormones!

~Roxy of course you can drive it! And I agree, it does need a name...mabye I'll hold a contest to pick it!

Great truck! We just camped at Wapiti Campground and we were flooded out of our site! But you must totally camp there~ beautiful, right on the river with goats on the mountain to boot!! We were on the trip of a lifetime in a rented 36 foot rv. Two weeks, two couples! We drove thru Cody~ It's beautiful! Enjoy that truck!

Diana my love of camping began with my grandparents who took us kids to the Wapiti campground during the summer for a couple weeks at a time. I'm excited to get my kids out there and learn to love it as well. So glad you enjoyed Cody, isn't it the best little town? Come again for sure!

This is marvelous! Truly, ask and ye shall receive stuff! Wow! Now, personally, I hate camping, but kids love it and that's what matters. Just watch out for bears!

Linda I am asking for more every moment of every day. I can't pass up these good vibes!