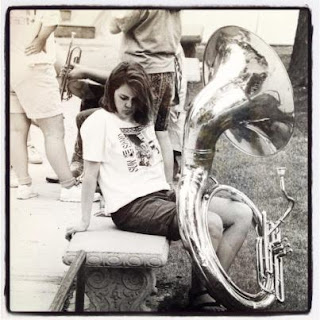 Today's photo is courtesy of the Bieske family archives.  This was taken probably the summer before my senior year of high school, and I didn't know my picture had been taken until I was handed an 8x10 print of it.  My main instrument in band was the bassoon, but since that isn't something you find in a marching band, this was my alternate instrument and I LOVED it!

I have to write and get this out before the kids get home from school, otherwise I might never get it done.  I just got done watching the movie Moneyball, and while I'm not usually a huge fan of sports movies, I did enjoy this one quite a bit.

It made me cry like a baby.  No, they didn't win the Superbowl or the Stanley Cup (kidding, I know my sports).  What made me bawl was this little seemingly insignificant part near the end.  Don't worry, if you haven't seen it I'm not giving anything away.

Anyway, there was a clip of a player during a real game - don't know the team, don't know when it happened, don't remember the guy's name.  Just know that he was a professional.  I think.  All that really doesn't matter anyway, because the visual - the visual of this blip will stick in my mind forever.

There was a big ol' fat guy up at bat, and in the movie they said he was always afraid to run to second base.  Well, he cracked the ball and made a run for it, and began to round first.  No sooner did he round it than he tumbled and fell and went crawling back to first, grasping for the base so he wouldn't get tagged.  As he clung to that base like it was his lifeline, the first baseman was bent down saying something to him.  It looked like he was being laughed at.

Until you realize the first baseman was telling him to run, pointing.  Other players were telling him to RUN.  He had hit a home run and didn't even notice.  Up he got in disbelief, and he rounded those fucking bases to the high-fives that awaited him at home plate.

So what made me cry?  How often do we shortchange ourselves, live our lives in fear - then scrape up an ounce of courage and crap out at the last second, tripping and stumbling, and running for the nearest lifeline, clinging to the reminder that Shit, I knew I shouldn't have tried that! Only to realize that in all of our self-doubt and fear, not only was greatness already within us, but we had hit the ball out of the fucking park.

Posted by The Accidental Somebody at 1:07 PM

That thing is bigger than you! I rented that movie once, but didn't watch. I may just have to rent it now. I'm so glad you are back to writing!!!

Just remember the doubt is within you, not in those who love you and mean the most. You rock, Kim, and always will.