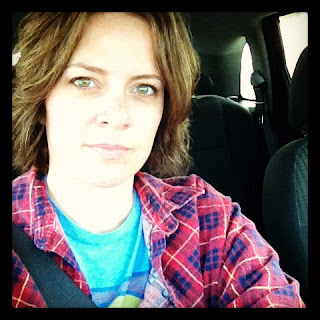 Today's picture is courtesy of my bad mood.  I don't know why I was in a mood - I just was, so I took a picture of it.  There you  have it.

I'm taking a film production class, one which I almost dropped in exchange for something to do with writing. The only thing that stopped me from changing was that I thought I had more time to do it before school got started.  That's what I get for checking the schedule for the first day of school at the last minute.

The class started out fairly small, but has leveled out at four of us who show up on a regular basis.  Right away we were each given the task of coming up with a script for a short film, to be between five and ten minutes, which we would then film, and learn about film production as we went.

Two of us wrote screenplays that will end up being larger productions (just more complicated scenes, etc), and the other two are fairly simple.  So, the two simple ones will be filmed this semester, the other two will be filmed next semester in the next-level class.  Then in May we'll have what the professor called a World Premiere of the movies, where we rent a limo, have people from the photography department come and take pictures, and all the glitz and glam that comes with a premiere.  Only in small-town Wyoming.

Can you say AWESOME?!

Anyway, in learning all that goes into making a movie, let me just say I am humbled.  Even making these piddly short films feels like constructing a 10,000 square foot mansion, one little square inch at a time.  I can't even imagine what goes into a huge Hollywood production.

Learning the ins and outs is fascinating, and I'm so glad I stayed with it.  My film will be shot next semester and I'm anticipating directing it and bringing it to life.  You'll all have to wait until it's finished to know what it's about.  As a general rule I don't like to talk about what I'm working on because it takes away its energy in a way I can't really explain.  Basically it fucks up my creative juju.

So I'm sorry, but you'll all have to wait until the World Premiere - I'll let everyone know when it is so that you can come watch, and one day when I'm big and famous you'll be able to say you were there for my very first one!

Posted by The Accidental Somebody at 9:56 PM

VVow, your ovvn Sundance. I mainly make stop action animations of things growing, like my orchid blooms opening, or more recently an okra bloom. I have plans for a three dimensional representation of the intensity of the flu season whereby the states rise and faLL as a virtual tiny WWI biplane flies in between and around the state shaped columns. The weekly data is available from the CDC.

That sounds like a blast! I hope you feel better!