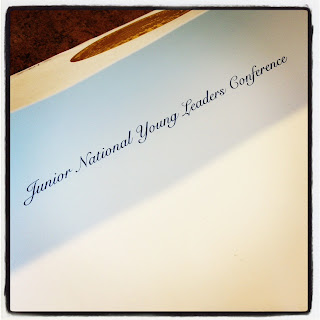 Yesterday Amanda came home from school holding a rather thick envelope she had been given by a teacher.    On the front of the envelope was written, "Please present this JrNYLC nomination package to your nominee, Amanda Bieske.  She didn't know what it was for, and as she opened it she said that maybe it was for a writing thing she had done.

She began to read the first letter out loud:

"Congratulations!  As a result of your outstanding academic achievements and demonstrated leadership potential, you have been selected to attend the 2013 Junior National Young Leaders Conference to be held in Washington, D.C."

Ho.Lee.Shit!  I bet my eyes were as big as saucers and  my grin looked as dumb as Goofy's, but as she read, my entire being seemed to float into the air, full of the most awesome pride for my girl.  Thoughts of me and Brandon accompanying her on her week-long trip whirled through all of our minds, and we began to excitedly talk about how awesome it was going to be.  Then I read the part that basically said parents aren't welcome, that the kids will all be doing everything together as their own group.

As soon as I said I'm so sorry Amanda, but this will have to be on your own, her eyes got huge and she burst into tears.  But I don't want to go so far away without my family! she blurted.  The second those words came out of her mouth and the tears began to fall, I nearly lost my composure as well.  I quickly gathered myself so I wouldn't make her feel any worse, but seeing her in a heap like that nearly tore me to shreds.

As she tried to wrap her head around this exciting, terrifying adventure, I assured her that I would never make her go, but it was an excellent opportunity that she would regret turning down.  I did my best to explain that she would make so many new friends, that everyone else attending would probably be scared shitless too, and that since it's not till summer she has plenty of time to prepare.  With a tremble in her voice, she decided that YES - she would go.  The cons aren't worth it, she said.

Throughout the rest of the evening she kept repeating that she was so shocked that she was chosen, that she could think of others who would have been better candidates, that she didn't see how she represented leadership.  I just stay quiet and do my thing... I reassured her that she is an excellent leader and there are such good qualities about her that are so natural she doesn't even realize she has them, and those qualities are what makes her perfect for this nomination.

I feel good about proclaiming my pride for her.  She is humble with her achievements; she works harder than any kid I know; like she said, she stays quiet and does her thing - not boasting, not asking for accolades, not looking for attention.  Because of this I  want the world and beyond to know that this young lady is going to do great things one day, and this opportunity just jettisoned her in the right direction.

I love you Amanda! Brandon and I are so proud of you, and your dad would be too!

Posted by The Accidental Somebody at 1:52 PM

I was super excited for her when I read earlier! What an amazing thing for her :)

Congrats to Amanda and her proud Mama and Brother! That is awesome.

A neat place to go, and an honor. Congratulations!

I love you but i can never seem to post from work... you need to call my job and fix that.

What a wonderful honor and opportunity. Congratulations, Amanda!

How great for her!!! She'll be the bomb.