Well shoot, it's been a minute since I last wrote.  Life has changed just a little.  This blog and its contents seem like a lifetime ago, and a whole different life ago.  I'll give you a quick update - after two and a half years of voluntary celibacy, I've met someone.  We're even engaged.  ENGAGED.  I never thought I'd say that ever again in my entire life after the way my firs t marriage imploded.  Erik Stitt is his name, an illustrative artist amongst many other things that I adore (check out his website The Art of Erik Stitt).  He has two gorgeous grown daughters and brought Zen Buddhism into my life.  Never in a million years did I see that coming, but I will be forever grateful.  The kids adore him too, in fact Brandon idolizes him.  I love him.  Absolutely love the shit out of this man, and he does me too.  So that's the gross stuff.

Back to the kids, the little ones who you all watched go through some of the most difficult periods of their lives throughout the life of this blog, the little ones who were silly and goofy and gave me so many fun stories to write about.  My little kids are gigantic!  I mean, they are as big as me gigantic!  Amanda is 16-years-old and is a junior, Brandon's 14-years-old and a freshman, and both are as snarky, smart, and funny as they always were.  When I started this blog Amanda was seven and Brandon was four.  They were fucking babies is what they were.  Now they're practically adults and it creeps me out.

But life is good.  I'm no longer acting, as that seemed to serve its purpose of getting my ass to lose the forty pounds I packed on when I lived in Cody.  It was so much fun while it lasted, but it's not a part of my life any longer and that's ok.  I'm currently working at Lowe's unloading freight from the truck, and I've never enjoyed a job more.  I come home physically wrung out, full of bruises, and dirtier than a pig in shit, but I love it.  There just isn't anything quite like good, hard work.

Anyway, that's the long and short of it.  I know I keep saying I'll write more often, so I won't say it again.  I'll just do my best to poke in once in a while.  Here are a few pictures of us all together, however they were taken back at the end of March.  We all pretty much look the same with the exception of Brandon, who is growing out "Jesus hair" and whose head looks like a giant shaggy mushroom. 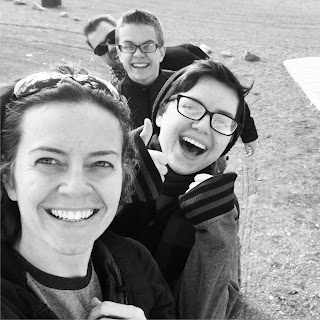 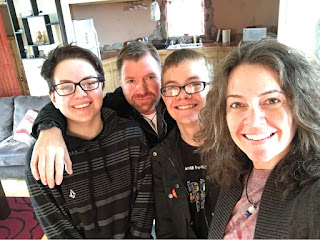 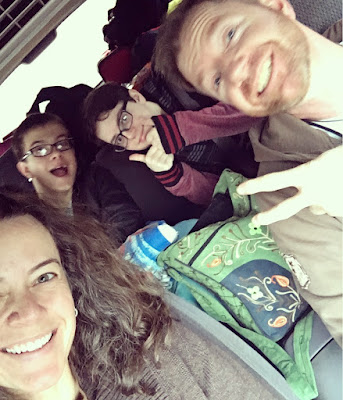 Posted by The Accidental Somebody at 12:43 AM