The wheels on the bus... 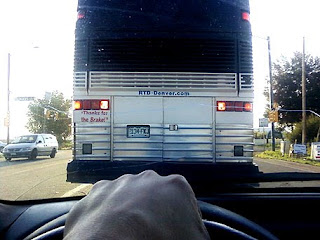 So you're probably wondering why on earth I've taken a picture of a Denver RTD bus...you see, it was a beautiful summer morning earlier today and I had the epiphany that the Denver metro mass transit system doesn't get enough publicity. We need to see more pictures of the rear-ends of their buses that we all curse at when we have to stop all of a sudden so they can let someone on or off. Dontcha think?

NO!! As a matter of fact, I was supposed to be ON the damn bus! I dropped the kids off at the school an hour early so that they could hang out with Miss Smith, the most wonderfully awesome second grade teacher on the face of the earth. My kids LOVE Miss Smith and she was gracious enough to tend to them so I wouldn't have to call in late to work, as our new daycare situation doesn't start until Monday.

But I digress...for some reason I misjudged my timing and, desperate to grab a soda at the convenience station right next to the bus stop where I intended to board the AA Sky Ride, I pulled into the parking lot about two minutes too late. ARGHHHH!!! What was I thinking? I was thinking I needed a Mt. Dew fix, that's what I was thinking, and it cost me a bout of stress and some unnecessary stops at red lights when I should have been carelessly speeding in order to pass the bus. Goodness I have some long sentences tonight...

Anyhoo, to make a long story short, I did end up getting ahead of the bus and had to make a run for it when I got out of my car. Luckily the bus driver waited for me, as I'm sure someone yelled the ever-so-exciting "WE HAVE A RUNNER!" 'Cause...ya know...that's what I was doing, I was running. In my uniform. Wearing a backpack.

Getting off the bus on the way home was almost as exciting, but I came purtnear close to wetting myself. After leaving the bus, another passenger and I slowly peeked into the street to watch for oncoming traffic. I noticed a car was coming from a distance so I figured I had plenty of time to cross. What I didn't figure was that it was propelling itself down the highway at Mach 3. I hightailed my ass across that street faster than ....well, as fast as I could. I heard myself say out loud to the woman next to me..."HOLY S#%^ that car almost hit me!!!" She looked at me as if I had just taken the Lord's name in vain and washed it in holy water. I guess she doesn't curse when a car nearly splatters her across the pavement.

Lesson learned, if you don't want to be road kill, stay out of the road. Lucky for you all I'm still alive enough to write about my fun FUN day. I hope tomorrow my head is on straight enough that I can catch the bus at the appropriate stop, and that I don't decide to play Russian Roulette with oncoming traffic. Wish me luck
Posted by The Accidental Somebody at 9:39 PM

Good grief please do be careful, my grandkids need their mom!! Its to early in life for you to depart yet! You have much work yet to do before you get creamed by oncoming traffic. Love ya! Carol