Have you ever stopped and really thought about when you made the change?  That change from carefree, messy, silly, goofy child to self-conscious, unsure, careful, baggy-eyed adult?  I'm not saying we go from childhood to adulthood over night, but there is a defining line between the innocence of being a child and well, the rest of your life.
I was going through pictures yesterday, chuckling at what a nutball I was as a kid.  My own kids are the same (and I see my childhood self brought back to life every once in a while when Amanda gets on a roll), and I chuckle at what nutballs they are too.  God I love how crazy they get, especially when they are in their own world together, not bothered by a thing except me telling them it's time to brush their teeth and get ready for bed.
I love to look back and see the smiles in the pictures of my little self, how I really didn't give a shit what anyone thought.  I wasn't a particularly cute kid - fat and ugly to start then gangly and ugly as I grew, but I was happy and that was all that mattered.
﻿ 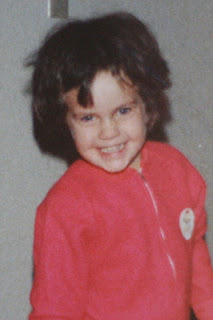 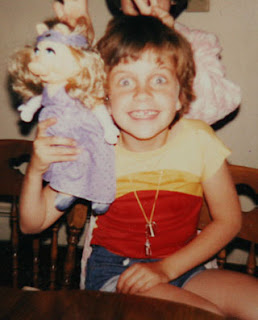 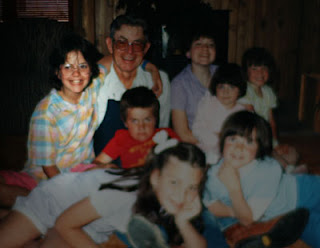 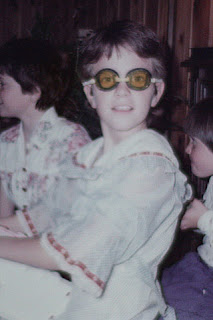 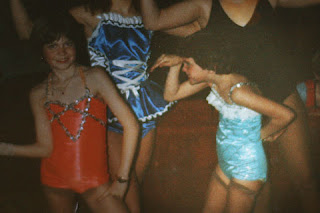 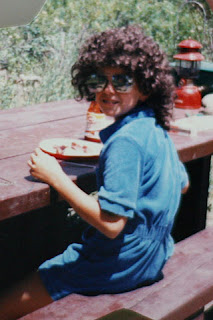 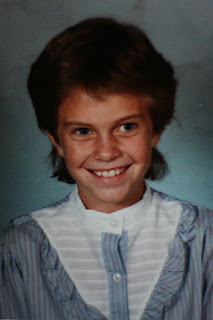 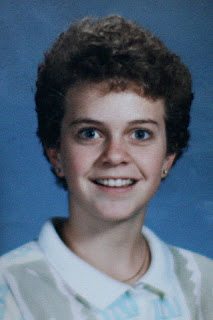 This is it, this picture right here - this is the turning point in my life when I became acutely aware of how I looked, aware of how others perceived me, aware of how heavy life all of a sudden became to me.  I vividly remember being at a Jr. High dance﻿ one night not long after this picture was taken, and at one point someone formed a snake.  Everyone grabbed hands and I held my free hand out to grab the hand of a boy, and as I reached out he recoiled in horror, making a face that said "Ewwww you are GROSS, I am NOT touching you!!"   Never before had I thought I would gross someone out.  Never before had I imagined anyone would care about what I looked like.  Never again would I think no one gave a shit.
Before the next school year began I had begun growing out my hair, I had filled out a little into what would become a very 'well-rounded' woman, and while I did become prettier on the outside I remained very self-conscious on the inside.  So as I look at my own kids who are so damn adorable in my eyes, I wonder what and when their turning points will be, what will be the catalyst into their own adult identity burdens...
﻿﻿
﻿﻿Nowadays when I'm feeling the weight of the change that happened so many years ago, when those crows feet seem extra deep or the crease between my brows a little furrowy, I do something that helps lift my mood a little.  With my photographic (and Photoshop!) skills I take a few pictures of myself until I find one I like, then add a little artistic filter if I feel like it.  I think of it as the poor woman's Glamour Shots only with less fancy blur.

﻿
So when was your change?  Was there anything specific that happened when childhood left and grown-up began?  Was it obvious and pin-pointable like mine, or did you ease into it and have it sneak up on you later in life?
Posted by The Accidental Somebody at 2:13 PM

I remember the moment when I felt the change: it was the first time I asked myself if I was happy. I was probably about 12 years old at the time. It was like I had gone from being a kid who was always in the present moment with whatever she was feeling to this YA who was suddenly conscious that our life's purpose was to supposedly to BE happy, as if we had to work at it, reach for it, strive for it. As if there was a magic way to be happy an that we had to find it somehow and then desperately hold onto those things that make us happy. - G

Such an interesting perspective Georgina - it isn't always about our physical aspects and may not always come from an outside source. I was 12 also, my daughter will be 12 in a year and a half, and as much as I want to protect her and never let the change happen, of course I know it will. Thank you for your insight.

One sultry afternoon my 52 year old father sat in his favorite chair to watch his favorite TV program and suddenly, unexpectedly and tragically died. Today, it's called "sudden cardiac arrest".

At 4:30 that afternoon I was a typical teenager thinking mostly about sports, girls and cars. By 7:00 that evening I was a man thinking about farming, poverty and rescuing my mother from despair. No more sports, girls or cars for me.

Happiness? I found it after a while because life is always more about choices than circumstances.

I can't quite put my finger on it, but then, maybe I can. I think I made every effort to not let go of my childhood. The reality of seeing a white man fleeing in his car down our street as a angry mob of black people chased after him with bricks and sticks, wanting to destroy him the day Dr. King was killed. The look of sheer terror on his face has never left me. My mother pulled us back from the window and covered our eyes in an effort to sheild us from the vulgarity. I only thought it was hilarious to see such fear and anger in its simplicity, not realizing it was my mother's attempt to sheild us from racial realities and protect our innocence a little longer. Or, maybe it was the feeling of morning "self-discovery" caused by inadvertant tent building and the messy shame I tried to cover up when I followed that path of abandoned fulfillment that caused my change. What eyeopeners! Or better yet, like peeking through the fingers of mothers hands over your eyes, not quite understanding exactly what was it she didn't want you to see or how to react to the glimpses of what you could see. These are the moments that drag us kicking and screaming into adulthood,... a realization of our basic selves that causes us to make choices, good or bad, right or wrong, and the realization that "change" always comes inevitably. YaNaMeen?

I wish we could hear from more...everyone has a story. Thank you for sharing!

I like Waldo had my moment of change come with tragedy, But later than most. I had just learned of my scholarships that would pay for the first three years of college and was excited to tell my dad about them. When I got to my house, my aunt was there., tears streaming down her cheeks as she stuttered..."Robert, your dad had an accident last night and he died." I don't remember crying at any time. I was just so stunned...The one day I had great news of accomplishment to tell him, he wasn't there. The smiling happy go lucky teenager that was me had changed, The reality of the fragility of life struck me and there was no looking back.

Not sure you really, totally ever "change". There is always a part that is a child. You learn the movements, the shuffles, the hows and the excuses. And you become comfortable with these and incorporate them into your life. You accept the responsibilities and the roles of the age you occupy, but there is always a part that questions, that wants to drop it all and just go do something else or do nothing at all. It is not really about total happiness as no one is happy all the time, that is fantasy. It is about living a kind of personal code that is evolving as your life goes on in cooperation with those who are important to you. Feeling good about yourself is a major part of this and feeling good about yourself is something we learn in childhood and do not have to give up as we approach the other end of our life.