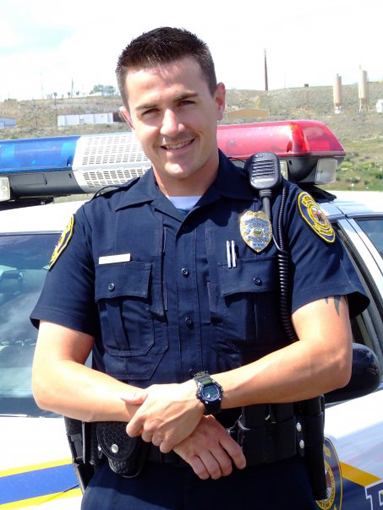 This is my little brother, John.  When he isn't playing daddy to two of the cutest little girls on earth, he's out on the streets of Cody fighting the hardened criminals of the old west.

You've heard all the stories of the shit that goes down out here in the sticks - does the name Jeremiah "Liver-Eating" Johnson ring a bell?  The man is buried  here for cryin' out loud!  Ok, maybe he died back in 1900 but still...this is  the west and in these parts shit gets CRAZY.

As a kid I was a total bitch to John.  He's about three and a half years younger than me, and by the way I treated him you'd think he had stolen my Cabbage Patch Kid, taken a seam ripper to her belly button, and forged the Xavier Roberts signature onto her other butt cheek - on a regular basis - just to piss me off.

In hindsight, I like to think my gross mistreatment of him throughout his childhood only prepared him for a life of fighting crime, protecting the innocent against the wicked.

Just how wicked could the fine citizens of our dignified community be, you ask?

In order to find out, all one has to do is read the local newspaper, the Cody Enterprise.  On Wednesdays, the public is allowed a peek into the goings on of the police department and oh what a read it is!  This morning while I tended to Mom's dogs (I'm happy to report they are still alive and all genitals intact!), I looted last night's newspaper from her front porch and eagerly perused the shit that puts bread on my brother's table.

I suggest taking a seat before reading any further because what you are going to see are actual incidents and they may be disturbing to some readers:


I would like to publicly tell my brother, protector of the fine city in which I am raising my two young children, YOU'RE WELCOME.  Were it not for the habitual torment I bestowed upon you,  you would be ill-equipped to cope with the crime and corruption that dirties the underbelly of our beautiful city.

Posted by The Accidental Somebody at 2:35 PM

Will the senseless violent crimes ever stop?

I KNOW, Bersercules. What is this world coming to?!

Darn it. She reported me texting her. I'm never believing her again.

I get unwanted texts all the time, from my cell phone company.

Are you sure it's safe to walk the streets there? (wink).

Those people in wheelchairs better NEVER holler and whoop at me or I'll get their ass sued! Disturbing citizens..

When I was growing up the paper once reported that a shoplifter returned stolen panties to the store with an apology note and a check to cover the costs. No. Really.

hahah! I especially liked the pain pills getting stolen. My husband is a cop in a dangerous city and I would love for these to be the kind of calls he was answering.

Your bro sounds like a fine man... well done for training him from such a young age - he'll need that on the mean streets of Cody! Fending off such hazards as the whooping and hollering wheelchair bound man :-)

Every text message from an ex.... is an unwanted text message.... that and from prison inmates I guess?