Before I begin this post, let me say this:  If you can't stand when parents brag about their kids, stop reading.  This mama is about to spew all sorts of goodness about her lil man, so consider yourself warned! 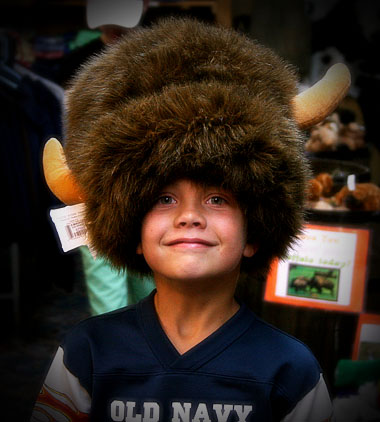 There isn't a more perfect hat for this boy's head.  First of all, he loves buffalo and totally geeked out when he saw it.  He usually doesn't like attention drawn to him, so I was happy he even let me take the picture let alone put the thing on his head.

Second of all, he has a huge cranium which completely filled the hat.  Without it he looks like a little white-boy version of Megamind.

I've known for a while that Brandon's smart - I might have had an inkling or two after he read several 600 to 800-page books.

Then one day after used the word incidentally  in casual conversation, it occurred to me he might have more going on upstairs than we realized.

Just maybe though, one can never be too sure!

And when he pulled this little number out of his hat

I thought DAMN!  I think the kid just might  be a little brainiac!

Today I received a letter in the mail, and it was about Brandon:

The StarGATE Selection and Placement Team is pleased to inform you that your child, Lil' White-boy Megamind, has been selected for participation in the Gifted and Talented Program...

All kidding aside, of course I've always known my little man is smart.  I just want to take a minute to say how very proud I am of him!  I wouldn't want to brag about him so much if he walked around boasting and being a giant big-headed jerk off.

Instead this child is one of the most kind-hearted little boys I've ever known.  A compassionate, giving, loving, humble little guy who just goes along in life as if it's perfectly normal for a kid his age to use big words and read giant books.

I love you Bubba!

Posted by The Accidental Somebody at 10:03 PM

Wow that is so awesome. Woo hoo Lil' White-boy Megamind!!!
is he going to be on TV?
xx

Now what is going on with your comments section, I never appear as i used to. I do realise it might be down to my own stupidity, but no time to go through it since I SECRETLY do it at work.
How to I do it so that my thumbnail appears on the left and ROxy

Tell him Congratulations! I am proud for him. It is really impressive that he will read a 600 page book. My 12 year old won't do that....(it requires too much time and she hates reading) ha ha. I wouldn't be surprised if one day he won a full scholarship to a college.

Uhhhh you're one lame duck talking to another! I installed a program called Disqus - I saw this commenting format on Linda Medrano's blog (The Good The Bad The Worse) and liked it because you can comment on specific comments, etc. Problem is, I'm still learning about it so I can't tell you (yet) how to do the thumbnail. I'll try to figure it out!

Roxy I installed a commenting program, problem is I don't know as much about it as I should. So let me do my homework and I'll see if I can figure out the thumbnail issue. And get to work!!

So sweet! You have a lot to be proud of!

Your "Bubba" is truly "bubbalicious". What a darling boy! You are so right to be proud of him! I love smart kids. It's like talking to a short 30 year old. He looks so freaking adorable in that hat!

I sure do...love the kid so much I think I'll keep him.

Linda, Bubbalicious is one derivitive of Bubba that I've used a lot...when he was little he used to have a lateral lisp and would say "I'm Bubbawischiouschs!" He is just like a short 30 year old and I am so loving him at this age.

Awwww! Enjoy it! I am so happy for you! And smart kids aren't that common, so be proud, be very very proud. I have four and not one of them is that smart...well, maybe Stinky Girl, but she stinks so it takes away from her mind. And while we're on the mind topic, I just had to say, you should have known Bubba was a genius based on the size of his forehead. That's what I hear anyway: big head, big brain! Love that hat!

That's too funny 'cause he really does have a large noggin! And why is it that the girls are the stinky ones? My girl has smelly feet too! Geezus bein a woman is hard before the woman part even shows up!

And I'm sure your kids are smarter than you think - well maybe except the one who ditched school. Were he smart he wouldn't have gotten caught (assuming that's what happened anyway)!

He is a yummy cupcake of a boy. I could eat him. He's truly adorable.

From the Mind of a Madman said...

Congrats..... and like any parent of a really smart kid will tell you... "You gotta stay one step ahead of those little monsters now.... those smart ones are almost too clever for their own good!"

You dun good momma. Being that I am male, I think if I were to echo Linda's second comment it would be a little creepy, so I'll just stop there.

Congrats on your little man!!! Congrats to you, you are the key to him being who he is . . . and he has flourished into his own!!! My daughter was in the same program - keep him busy and creative as you have. That will be your only salvation!! He will do well - the program opens so many doors . . . be ready to enter!!!! ~ blessings to you both!